Will you help with the

God loves to grow His church in areas where people were once in bondage to the powers of darkness through atheistic governments. Please help us to continue supporting this young couple to spread the Gospel of Jesus Christ in a dark part of the world.

In 2005, MIA began supporting them and their outreach.  In 2005, they started a children’s ministry program in the church.  In 2007 and 2008, a plot was purchased for a new church and construction began on the first evangelical church building in the history of the city of KRALJEVO!!

As of October, 2010, the new two-story church building was about 60% complete and will seat approximately 250-300 people in the sanctuary.  There are 85 children in the children’s ministry program and about 80-90 born-again believers in the church. They recently mothered another new church in the town of CHACHAK where eleven new believers were just water baptized. 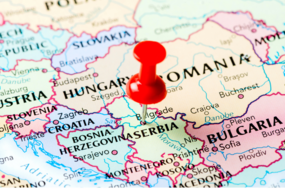 Bob and Ruby were first introduced to Pastor Shasa and Sara Vijakic in 2003 while on a Serbian ministry trip participating with American Missionary Evangelists Mike and Marigold Cheshier.

Shasa and Sara had first moved to Kraljevo, a city of 100,000 people, in 1997.  At that time, there was not even one evangelical church in the entire city!  Shasa and Sara started a house church using a "JESUS" film, and in 2004 they rented a small hall that would seat 32 people.  The church soon grew to 50-90 people, including some refugees from Kosovo.