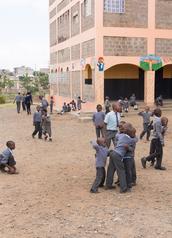 ​Mathare Valley is a large slum in Nairobi, Kenya with upwards of 500,000 people living in abject poverty.  In 1995, Pastors Peter and Jane Nuthu agreed to take over a long vacated KAG (Kenya Assemblies of God) church.in a part of the slum called Kariobangi.  MCDC was started with twelve street boys who came to help clean up the church grounds each Saturday.  Bread and water was given to them, and the word quickly spread, because for the first time in their lives they had a piece of fresh bread and a cup of clean water, along with some water to bathe and wash their clothes.